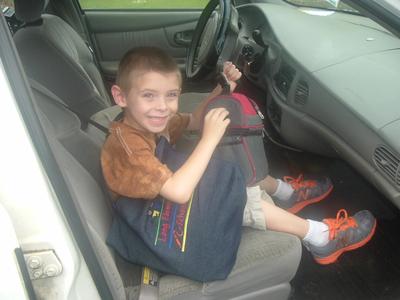 This morning...First day of school!

My 5 year old started school this morning. I was so distraught about it. He acted like it was just a regular day. He never sleeps. Last night he went to bed at 9p.m. and finally at 10:45p.m. he went to sleep.

I knew he was exhausted because he did the same thing the night before and only had 3 hours of sleep. Then stayed up the rest of the night and all day. So last night the same thing! He woke up at 2a.m. He woke me up asking me a question about our kittens. Then almost immediately started the wiggling process to fight off his sleep. He does this every night.

He has been doing this for two years now. I always thought he would grow out of it. But now he started school this morning and I know it will effect his grades and behavior. I asked him last night why he doesn't want to sleep and he told me because he has bad dreams and is scared of them. I explained to him that dreaming was normal and everyone does it. But needless to say he stayed up the rest of the night.

and it would put him to sleep. But I am not sure of that. I think it is time for me to seek out a sleep clinic or something.

When he was 3 and 4 years old he had very bad night terrors. To the point of getting up out of bed and running from whatever was after him and screaming, crying, shaking, and talking in his sleep. It was not only scary for me but for him because it would wake him up and he would remember them. And that's what started his downward spiral of insomnia.

I just don't know how to break this cycle. He is a very busy little boy. He is never still. He fights sleeping tooth and nail until he just collapses wherever he is. Almost looks like he passes out. And waking him is impossible. But the whole time he sleeps it isn't peacefully. I am very concerned for his health. What do I need to do to help my suffering son?

Thank you for listening,
Deanna

Join in and write your own page! It's easy to do. How? Simply click here to return to Experiences With Sleep Disorders In Children.