What Is Sleep? The Defining Characteristics

Written by Kevin Morton with adaptations from the Stanford Sleep Book

Sleep is often defined and described by comparing and contrasting it with wakefulness. It makes sense that this happens. We can access what it means for us to be awake much more readily than we can what it means to be asleep (due to those pesky reasons involving consciousness and the like).

But the relative quiescence of sleep has led many people to look upon it as merely a periodic cessation or interruption of the waking state. For many, there is a natural inclination to assume that there is a great reduction in brain activity and body movement during sleep, but this inclination greatly oversimplifies the complex and fascinating world of sleep.

In the rest of this sleep step, and indeed in the rest of the Sleep Essentials guide, we'll delve into that world, highlighting the beautiful subtleties, the amazing mechanisms, and the intriguing disorders within.

But first, let's start at the central, albeit not-so-simple question: What is sleep?

What Is Sleep? Reversibility and Perceptual Disengagement

Normal sleep is defined by two essential characteristics, neither of which involve the brain "resting" or the body ceasing to move, as one might be inclined to think.

The first defining characteristic of sleep is quite simple and is known as reversibility.

Reversibility simply states that a sleeper can always be awoken with a stimulus at a given intensity. This intensity varies depending upon the individual and stage of sleep the individual is in at the time of the stimulus (i.e. during deeper sleep the stimulus must be stronger than during light sleep), but for sleep to be occuring there always has to be a given level of stimulus that can cause an awakening. 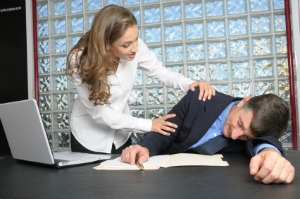 With a strong enough stimulus, this snoozing worker will be able to be woken up. A crucial part of what makes sleep sleep is that it can always be reversed back to wakefulness with a stimulus. If not, it is instead considered a coma, an anesthetic state, or something of the like.

If while you are awake and attentive I whisper in your ear, you will hear me and I will have elicited some kind of a response--a thought, a reciprocating whisper, etc. If I do the same to you while you are asleep I will likely elicit no response. But if I make the stimulus louder and louder, or use increasing bodily force, you will eventually, at some point, wake up.

This ability to be woken up, or have your sleep state reversed back to waking, is what reversibility is all about, and thus differentiates sleep from such other states as comas, anesthesia, and hibernation.

The second defining characteristic of sleep is perceptual disengagement from the environment. During sleep we have essentially no awareness of the myriad sights, sounds, and smells around us, the same sights, sounds, and smells that we are continuously conscious of in the waking state. A strong enough stimulus may awaken a sleeping person (as reversibility states), but the exact nature of the stimulus is not captured by the sleeping person as it would be by the waking person.

This perceptual disengagement from the environment is an active process and not just the result of, say for example, our eyes closing. In fact, if your eyelids are taped open and you fall asleep you still stop seeing. From the moment of sleep onset to the moment we awaken we are essentially blind.

For all intents and purposes, as soon as the moment sleep begins we are blind, deaf, and insensitive to touch for all stimuli below our arousal threshold. In thinking of places I would least like to become blind and deaf, driving on the freeway is definitely high up on the list. But yet people fall asleep at the wheel all too often, causing thousands of tragic and unnecessary deaths every year.

And the most disgruntling part? It's not like any of these accidents were expected. Every person who has fallen asleep at the wheel was likely under the impression that something like that was not going to happen to them. That's not the way they were going to go. And yet it did happen.

This instantaneous perceptual disengagement at sleep onset does not mean, however, that we are instananeously unconscious at the same time. Rather, though we are disengaged with the physical world while we sleep, we are simultaneously engaged with an inner world of our own, where the rules of the physical world don't apply. Though our memory may not always capture it, we are awash in a peculiar sleep consciousness for much of the night, and at certain times we undergo the often awe-inspiring state we call dreaming.

Our most vivid dreams, as it turns out, takes place during a very specific time of the night, while we are in a state known as REM sleep. The mention of REM sleep here calls to attention that while sleep has two general defining characteristics, all sleep is not the same. It is to those distinctions that we turn our attention to now.

The Two Types of Sleep and The Stages Within

The idea that sleep is not just sleep--that there are more nuanced aspects at play that serve to differenciate different types of sleep--was still quite the novel notion well into the 20th century.

By studying brain waves in the late 1930s, Alfred Lee Loomis, an American also known for significant work in developing the radar, along with his coworkers were able to classify 5 different levels of sleep in 1937. They referred to these 5 different levels simply using letters, A to E, and the next big step in understanding sleep wasn't made until 15 years later.

It was then that Dr. Dement

, along with his fellow PhD student Eugene Aserinsky and their mentor Nathaniel Kleitman, made the observation that one of those 5 states that Loomis had described was actually completely distinct from the other 4 and belonged in a category all to its own. This state was named Rapid Eye Movement sleep, or REM sleep, after the curious actions the eye took throughout the course of the stage.

The other 4 stages were henceforth grouped under the general category of non-REM sleep (or NREM sleep), and the classification model we use today was born. With this system in place and advancements in the ability to record brain waves continuously having been made (a method of recording known as polysomnography

), it was only a matter of some dedicated observation and resourceful thinking before our understanding of what sleep is increased dramatically.

In the next sleep step we dive right into that increased understanding, examining REM and NREM sleep a bit more closely before taking a journey through the typical night of sleep to see how all the stages interact. Want to know what time of night you dream, why your eyes move crazily in REM, or how some people wake up from sleep completely paralyzed? It's all ahead on the next page!

Or select from the Sleep Essentials Quick Guide Table of Contents

Other interesting places to go:

Go from What is Sleep? to Why Do We Dream?

Go from What is Sleep? to thought provoking Quotes About Sleep

What is sleep really?
Have even more questions after reading this article?
Ask us!
Copyright © 2017 End-Your-Sleep-Deprivation.com. All Rights Reserved.
In Corroboration With Dr. William C. Dement's Sleep & Dreams Course - Stanford, CA