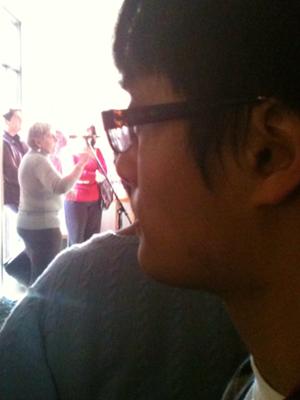 I recently attended an award ceremony for Mary Carskadon, a famous sleep researcher and one of the guest speakers for my Sleep and Dreams class. It was located in the Jerry House, where much of the most important sleep research at Stanford University had been conducted in the 70's-80's. Going in, I fairly expected a relatively serious and solemn event. After all, Dr. Carskadon was (and still is) one of the foremost scientists on the nature of sleep, and it was due to her long-range studies on the effects of sleep, sleep debt, and sleep disorders that this ceremony was being held today.

Yet, soon after arriving, I realized that my assumptions were incorrect, and the event was closer to a celebration of life and family reunion, rather than just a formal event. Although many famous Stanford faculty members were on hand to present her award, the large crowd consisted primarily of the researchers and the "trodes" that participated in her many important studies, adding a nostalgic element to the ceremony.

However, all were there to recognize her crucial work on the area of sleep, and aside from all the reminiscing and light-hearted banter, it was a fairly serious discussion of her many achievements while at Stanford. Dr. William Dement, in particular, was present at the presentation, and with Dr. Pelayo, lauded her studies proving the cumulative nature of Sleep Debt, and detailed her path of becoming an important faculty member at Stanford. They also discussed the research and initiatives Dr. Carskadon was conducting at Brown University, and talked about the newest generation of researchers that were under her tutelage there, known as the Dement Fellows.

All in all, I enjoyed attending the event, and I learned much more about the studies that she introduced in my Sleep and Dreams class. Meeting the "trodes" who had since grown up hearing the many stories of a since-bygone age made it seem as if I had stepped through time in an exciting era of science when sleep research really was just in its infancy. One amusing anecdote at the event was when Dr. Dement sang along with the band members from the Grateful Dead, an incident that added to my happy memories of the event.