Psychology, with its studies of development and learning, has identified many of the critical periods for the evolvement of vital functions. In response to these discoveries, young children have been targeted as an extremely effective group for the introduction of novel concepts one wishes to become cemented. It is based on this logic that we developed our outreach project.

We wrote and illustrated a children's book that adopted the idea of sleep debt, translating it into a kid-friendly format so that there might become a greater rudimentary understanding of the effects that even their young bodies might feel. Our starting point was to select an easily identifiable character for children of all backgrounds. This desire prompted our choice to use animals instead of people, opting for the penguin, an increasingly visible image within media targeted towards children. 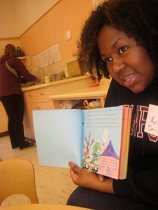 Once arriving at Bing Nursery School with our completed project, we were delighted to find that the children, ages 3 to 5, who are free to decide what activities in which they will partake, were not only interested in the strangers in their play space but also the interesting creation in their hands. Before beginning our reading, we built a rapport with the two groups of about 10-15 children total, asking their names, telling them a bit of background on the story's topic of staying up past bedtime, and inquiring about their home lives. Once we felt they were effectively engaged, we commenced our reading, which was interrupted with several clarifications and questions enabling them to draw parallels between Harry, the main character, and their own experiences. Ultimately, we found that these children not only were capable of digesting a concept intuitive to their way of life, but they had fun while doing it, thus cementing the notion proven time and time again that the potential for growth and learning during this period is essentially limitless.