The Causes of Sleep Apnea - Understanding Why We Can't Breathe

The cause of an apnea during sleep (one apnea, meaning one moment of not breathing) is the closing of the upper airway, often due to the tongue relaxing and falling back to block the airway, or copious amounts of tissue blocking the airway when the muscles around them relax during sleep. These muscles are strong enough to prop the airway open during wakefulness, but during sleep they are lax, and the tissues and tongue flop wherever they fall.

The end result for an individual with sleep apnea is not having the ability to breathe. Their blood oxygen level lowers until their body, in emergency mode, forces them awake to take a quick breath. Falling back asleep more or less immediately, the sleeper forgets about the awakening and the process begins again. Sleepers with sleep apnea can experience hundreds (sometimes even thousands) of these traumatic awakenings every night. Sound serious, and a quick route to a heart attack? You bet it is.

But why does the airway get blocked during sleep in some and not in others? What sets a person with sleep apnea apart? Understanding the exact root causes of sleep apnea, which vary from person to person, is the first step to finding a solution.

What Is Sleep Apnea?

Sleep apnea literally means the cessation of breathing during sleep. It has been estimated that an alarming 24% of adult men and 9% of adult women (totaling around 30-50 million people) in the United States have sleep apnea, making it one of the most prevalent disorders known to man, and with what its consequences are, surely one of the most dangerous.

Click here to learn more about what sleep apnea is.

So to understand the causes of sleep apnea at a more in depth level and why so many people cannot breathe properly during sleep, it is essential that we first understand a bit about how we breathe when we are awake.

The human breathing apparatus essentially breaks down to three components: the chest (or thorax), the upper airway, and the brain's control system.

The first component, the chest, contains the lungs, the diaphragm, the rib cage, and the surrounding muscles that are crucial for inspiration, receiving inspired air, and dispersing oxygen through the use of hemoglobin. 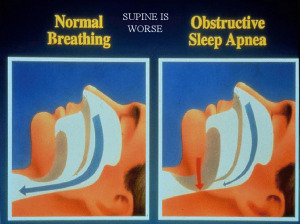 What is it that causes the airway to become blocked in individuals with obstructive sleep apnea?

The second component, the upper airway, includes the nose and mouth, nostrils, palate, pharynx, larynx, and most importantly when it comes to the causes of sleep apnea, the muscles of the tongue and throat.

But before we get to that, we can briefly mention that the third component of our breathing system is the control system in the brain that regulates breathing and makes sure that the amount of air going into and out of the lungs corresponds with the body's need to get oxygen and get rid of carbon dioxide. It can be expected that this mechanism takes over and wakes up a sleeping victim when an apnea episode lasts too long and the body is in desperate need of oxygen.

This negative pressure is the basis behind the CPAP (continuous positive airway pressure) treatment, which generates a positive pressure to counteract the negative, supporting the airway and keeping it from collapsing in on itself.

While awake and breathing easily, when the volume of the chest begins to expand the air pressure inside the lungs becomes negative with respect to the outside atmosphere as air floods in through the upper airway. If you try to inhale while holding your mouth and nose closed you can feel that negative pressure skyrocket, and essentially this is what happens during an obstructive sleep apnea episode, the only difference (besides being asleep) being that the upper airway gets closed from the inside instead of from you plugging your own nose. But how does it get closed?

There are several reasons why the airway can get closed, but a key thing to understand for all of them is the design of the upper airway itself, which is made up of a flexible mixture of bone, muscle, and cartilage. 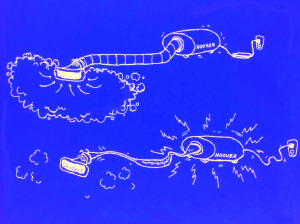 You can think of the upper airway closing like the vacuum illustration above: when there's too much inspiratory pressure the flexible hose of the vacuum will suck close if not supported, and the "lungs" of the vacuum won't get any, err...dirt.

For whatever reason, as humans we have been endowed with somewhat of a parsimonious design for our airways--we use the same tube to speak, eat/drink, and to breathe. And while our soft, flexibe upper airway is great for speaking and eating, it is horribly flawed for breathing during sleep because it can get sucked close and prevent us from breathing. It is this soft, pliable design that is really the root cause of sleep apnea, for if we had a more rigid tube specifically for breathing, sleep apnea likely wouldn't be a problem.

When we breathe in while we are awake, our tongue muscles contract to pull the tongue in a bit. In addition, inhaling also causes muscles on the sides of our throats to contract. These throat muscles hold the upper airway open, kind of like tent poles holding up a tent, so that we can breathe. But during sleep the vigor of the throat contracting muscles is reduced, more so in some than in others. When it is reduced enough in individuals with small airways, a strong inspiratory effort can bypass the muscles' weakened support and suck the flexible airway closed, causing an apnea episode.

The reduction of contraction in the tongue during sleep can also cause the tongue to flop back enough to block the airway, which can also be the cause of an apnea, and it is for this reason that sleeping on one's back, also known as supine position (where gravity leads the tongue straight back into the throat), is often the worst spot to sleep for sufferers of sleep apnea.

Sometimes the collapsing throat and tongue muscles don't completely block off the entire airway, and breathing continues with a significantly decreased amount of air. This situation is called a hypopnea (see right). However, these hypopneas can still lead to large drop offs of blood oxygen, great increases of inspiratory effort, and often can only be terminated by an arousal, just like an apnea episode.

Individuals with obstructive sleep apnea generally have smaller upper airway dimensions than individuals whose breathing during sleep is entirely normal. This generally means a smaller jaw together with a larger tongue. Airway size can also be reduced by the presence of tonsils, fatty tissue, edema (swelling), and a host of other anatomical factors.

In the same light, any other sort of physical feature that can reduce the size of the airway can contribute to the cause of sleep apnea. For example (and this is somewhat of a repeat of above), people with large tongues, large tonsils, small jaws, or large paletes can be predisposed to having sleep apnea.

Although sleep apnea can occur at all ages, sparing neither infants or the elderly, more than half of all patients are 35 years or older when they are diagnosed. However, abnormal breathing during sleep usually precedes extreme daytime sleepiness and diagnosis by at least a few years, so sleep apnea does typically show a worsening progression with time. Dr. Dement comments on this progression when it comes to predicting sleep apnea cases a bit below:

At the present time, it is difficult to predict what will eventually happen to individuals who have either mild obstructive sleep apnea or only a tendency to snore very loudly without evidence of apnea. However, there is no question that such individuals have a much greater likelihood of developing severe OSA than individuals who breath easily and noiselessly when they are sleeping.

The above words contribute to the point that no snoring is normal. Breathing during sleep should not be labored, although it is frequently the case that it is. If snoring is ever accompanied by persistent fatigue throughout the day when it seems like you should have obtained enough rest, it is absolutely crucial for your health that you see a sleep specialists and let him or her know your situation. And sooner, rather than later.

What do you think about sleep apnea and its causes? Have anything to add? Let us know by sharing your thoughts, questions, and experiences.