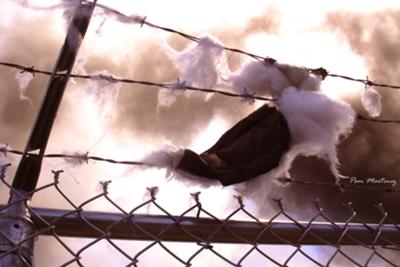 I was living on a skyscraper. It seemed to be in the future. One night I got a call to come look outside. I went out to the black top to see this high tech house next to me, with lots of pipes, ladders and machines. The distance between my skyscraper and theirs was small enough to jump. I waited until I got a hologram video message right in front of me.

A teacher i used to know was on-screen, talking. He said he created something called the Core-X, and warned me to beware. I was a little concerned, but I went to bed, I had school the next day.

The classroom I was in was a small blue-ish white room on the second story. And during that class, I severed my left middle finger, and my right finger in between the pinky and the middle. I cried so hard, because I would never, ever get these fingers back, not because it hurt, it didn’t hurt at all. The teacher was extremely mean, and took away the two fingers from me.
Then it was time to do some sort of scene role-playing thing. A few kids dressed up in green garbage bags (They had holes in the side and top for the head and arms, and the opening was for the legs)

And I suddenly had on this whole grudge-like costume on. I was chasing the kids around with a plastic hatchet, and when I had them all cornered, I swung it down. The teacher turned off the lights for dramatic effect, but I didn’t touch anyone with it.
When it was time to dismiss class, she let everyone go but me and a couple other kids. She was extremely mean to us, screaming and yelling. I asked if I could have my fingers back. She suddenly got really nice and smiled really big at me as I came up to the front of the classroom. (My desk was already pretty close to the teacher’s desk.)

She took the fingers out of her pocket, and handed them to me. They were sticky with this gross brown stringy goop. They were also cold.

“You may go.” She said through clenched teeth.
I left and went to the bathroom to clean the fingers off. When they were clean, but still cold, I put them in my pocket.

I went to the cafeteria to get some lunch, then went out to the courtyard. Before I could even begin eating, The teacher's hologram appeared in front of me.

“The Core-X is very powerful. It can control anyone, and make them do anything.” He said menacingly.

Before I could understand, every kid in the courtyard, dropped what they were doing, and began do attack each other. A couple began to come after me, then more, until a mob was after me. I ran through the doors and down the street.

That night, I went out to the black top again, and jumped the gap between the two buildings. It looked like a construction site on the other side. There was a sliding glass door further in the black top, but before I could look inside, these guards with black tribal marks on their face ran toward the place where I was. By the time they got there, I was already at the to of a nearby ladder. At the top was a chute that led down to blackness.
I got a piece of metal and slid down the chute on it.

I’m not sure how, but I ended up in this camp in the middle of the desert. All around the camp was a barbed wire fence. I noticed hundreds of kids walking around robotically. They were being controlled by the Core-X. I decided to walk the same way, just in case any guards were there. They would ride scooters and bikes or just walk around, completely oblivious. I got caught in group of kids that wanted to ride something, so I chose a scooter to ride. I ran into two kids I used to know. Suddenly, they seemed to snap out of the Core-X’s hold.

“Who are you?” One of the kids asked.

The Core-X apparently erased a person’s mind. How horrible. I walked robotically toward another person I knew, but I suddenly heard a BANG!!

A girl with a shotgun was coming after me. They had discovered me. She shot several more times as I hid behind a tree. One shot hit me in the arm. Panicking behind the tree, I grabbed a dirt clod and threw it around the other side of the tree.

“Oww!” The girl yelled. I peered around the tree in disbelief. She was on the ground holding her head, the shotgun in front of her. Looking up, she exclaimed “ You saved me!”

I had learned enough. Heading toward the barbed wire fence, I was stopped by the girl. “What about me?”

“I need someone on the inside I can trust. Just act like them, you’ll be fine.” I jumped the fence, flinching at the barbed wire, and ran for the distant city.