Driving and Narcolepsy: Should People With Narcolepsy Get Behind the Wheel?

Written by Allyson Edwards with contributions by Kevin Morton

Dozing off while driving is no small thing. Sleep-related accidents have killed thousands of individuals and are a serious concern to the well-being of our society. And this is exactly the reason why the Drowsiness Is Red Alert mantra is so important to remember.

"If the ability to stay alert while driving is threatened, the symptom must not be ignored."

The hallmark symptom of narcolepsy is the cataplectic attack, where sudden bursts of REM sleep (and thus the near-total-body paralysis that comes with it) intrude on the waking state. To put it simply, a narcoleptic patient could go from standing up, talking with friends to suddenly on the floor paralyzed, completely unable to move in REM sleep, in a matter of seconds. (See what a cataplectic attack looks like.)

Of course, some narcoleptics experience cataplectic attacks in various degrees of severity, so in mild cases the individual may just feel very weak at the knees as the muscle atonia mechanism begins to kick in.

Has this ever happened to you? Do you have narcolepsy yourself? We would love it if you shared your experiences and insights with us and our visitors.

If you have any thoughts or questions about narcolepsy and driving in particular, you can use this other form at the bottom of the page to share them.

If you are ever at risk of losing your alertness while driving, you must get off the road!

Clearly the dangers of driving depend to a large degree on the severity of the symptoms, but as stated above, if the ability to stay alert could be threatened, action must be taken before it is too late.

In addition, excessive daytime sleepiness is also a very common symptom of narcolepsy. The combination of cataplectic attacks and excessive drowsiness really makes driving with narcolepsy a risky endeavor if the narcolepsy symptoms are not under control with the appropriate treatments.

Learn more about the symptoms of narcolepsy.

You're driving down Route 66 and there's no one coming your way or trailing behind you. The tumbleweeds roll along and the sky is clear; there's nothing to distract from the monotony. If you were carrying a good-sized sleep debt, such would be a time where you would likely be particularly vulnerable to falling asleep at the wheel.

You tune into the radio and listen to the hosts analyze and debate, talk and argue, and you're ready to turn it all off and start counting down from a million. Suddenly your favorite song starts to play, and you are so extremely thrilled that there's something to sing that before the first lyrics jump out of your mouth you've gone rigid and unaware of reality around you. You have no control of your body or your consciousness. Because you chose to sit behind that wheel, you are completely powerless over your own fate. In the next instant, your car could be destroyed; you could be trapped, injured, or dead.

Driving with narcolepsy is extremely dangerous if your symptoms are not under control. Putting yourself in a situation where you run the risk of falling asleep at the wheel is, as Dr. Dement is bold enough to say, is even more hazardous than operating a vehicle under the influence of alcohol, and the numbers back this up. 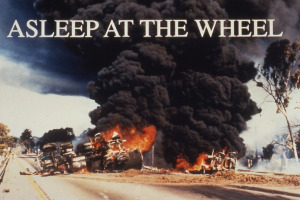 Sleep-related accidents have caused untold numbers of fatalaties on the road. If you ever feel sleepy on the road, remember that Drowsiness Is Red Alert!

According to the U.S. National Highway Traffic Safety Administration (NHTSA), approximately 100,000 motor vehicle crashes per year, as reported by authorities, involve sleepiness of the driver as the primary factor. Of these 100,000 sleep-related car accidents, approximately 71,000 involve serious injury and 1,500 result in one or more fatalities.

We absolutely cannot trust our well being or the well-being of others to the possibility of losing control on the road due to a sleep disorder. If you have narcolepsy and your symptoms are not under complete control, you must do something to prevent yourself from adding to those above statistics. If your alertness is threatened, stay off the road.

Spread the message. There is a chance that your neighbor, friend, cousin, waiter, landlord, professor, or baseball coach has narcolepsy and is risking their life every time they turn that key and fire up that ignition. Driving and narcolepsy: TOGETHER, THEY COULD KILL YOU.

Even if you don't have narcolepsy, this advice is still very applicable. Know what you're risking when you choose to drive while feeling sleepy. Death is not worth it, so always remember that on the road, Drowsiness Is Red Alert!

What's Your Take On Driving With Narcolepsy?

For the 250,000 Americans and many others around the globe affected by narcolepsy, the issue of driving is an important one. What do you think about driving and narcolepsy?

Read Other Driving and Narcolepsy Thoughts

Click on the links below to read the thoughts of others with regards to narcolepsy and driving. They were all written by other visitors to this page, just like you.

My Cousin Is Narcoleptic. So Was My Grandfather
In 1943 I spent five months in Minnesota with relatives. I rode with my grandfather to keep him awake as he drove. He nodded off quite often, but he …

Driving Off The Road, Falling Asleep, Wake Up In Morning Completely Paralyzed
In April of 1968, I was driving a 2 1/2 ton truck while in Germany. I ran off the road in the middle of the afternoon. While stationed at Fort Knox, Kentucky, …

Not Officially Diagnosed Yet - Drove and Nearly Crashed
I am sleepy almost 24x7s. I last drove around 2005/ 2006, and no longer have a car. My sleepiness has worsened since that car was sold. Also, cataplexy …

Lucky To Be Alive... Narcolepsy All Of My Life
I have had narcolepsy all my life. I am 50 years old now and although i never knew what the disease was until i was around 45 i went through most of …

Have Narcolepsy and Cateplexy
Honestly, Cataplexy is very well treated with medication in people who have Narcolepsy! I have severe narcolepsy with cataplexy although I don't quite …

Getting My Driver's License With Narcolepsy Without Cataplexy
It is very common to have narcolepsy without cataplexy. I do. It is also possible to treat narcolepsy, through medicine and maintaining good sleep hygiene, …

Cataplexy + Driving
I'm with you on this. My wife has Narcolepsy, she has no control when she will nod out, yet feels safe to drive? I honestly think if you have Narcolepsy, …

You can learn how to make a great website too. Find out how!