Elderly Sleep - How Sleep Changes, And Does Not Change, As You Get Older

Written by Kevin Morton and inspired by the lecture of Dr. Rafael Pelayo

Contrary to common belief, the amount of sleep you need does not change as you get older. Despite stereotypes of ever-snoozing grandmas and grandpas, overall sleep need is no different in the elderly than in the middle-aged. But while the need for sleep doesn't change with old age, the ability to sleep sometimes changes significantly, but for reasons due to the other health issues that often come with age.

Other medical issues that commonly arise with age--things like arthritis and joint stiffness, for instance--can significantly effect how well you sleep. The increasing prevalence of health factors that can keep you from resting comfortably at night is the biggest contributing factor to elderly sleep debt that can then bring about the stronger impetus to nap during the day. 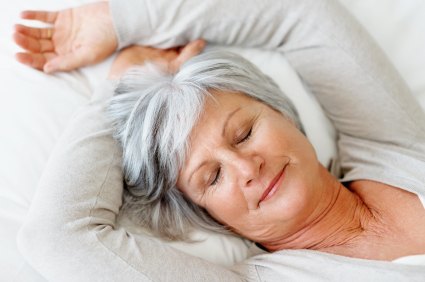 While this sleeper's body requires the same amount of sleep as it did 30 years ago, there are several important differences about elderly sleep.

In elderly sleep, it's not the case that sleep need goes up, but instead that sleep efficiency at night sometimes goes down.

But this isn't the case for all elders. In fact, most elderly sleep perfectly fine. In a 2003 National Sleep Foundation self-rated survey for sleep quality, 79% of people over 65 years old responded that they slept either good, very good, or excellent. This was even an increase from the younger 55-64 age bracket. You can see the comparison below:

This recognition of the overall healthy status of elderly sleep calls to the forefront an important statement for this topic:

Tons of Naps? Despite stereotypical images we have been flooded with throughout our movie and television watching days, frequent naps in the elderly population are not all that common. In fact, in the age range 55-84, over 60% of elderly participants in another NSF survey reported taking 3 or less naps per month, with 27% stating that they just about never nap. Here's the breakdown:

Poor Sleepers? While some people from every age cohort have their problems, a lot of the elderly sleep just fine. As mentioned above, for the ones who don't it's often a medical condition that's causing the difficulty. It's actually more intuitive perhaps to think of elderly as great sleepers. They often have less stress in their lives than in middle-age years, and are more often operating on their own schedule that can adjust to suit their sleeping desires.

The fact of the matter is it's not normal to sleep poorly as you get older, so if your sleep is bothering you don't just chalk it up to old age. There are more precise contributing factors that you should look for, discover, and take steps to alleviate.

One common issue that arises with elderly sleep is the issue of falling asleep very early in the night only to wake up extremely early in the morning (e.g. 2-5 AM), despite not desiring to wake up until much later. When this happens persistently it is known as advanced sleep phase syndrome (ASPS), essentially the opposite of the delayed sleep phases that often are present in adolescent sleep cycles.

Advanced sleep phase syndrome is a circadian rhythm issue that basically involves one's biological clock shifting forward too far. When this happens, clock-dependent alerting hormones are secreted too early in the morning, resulting in the sleeper awakening and being unable to return to sleep, usually because they're not sleepy anymore.

Biologically this is fine as long as the individual is still getting enough sleep, but the problem lies in the fact that it's often undesirable because the individual would rather be up a bit later at night to socialize with family and friends, while not being awake and alone during the wee hours of the morning.

Different people have different preferences here, but if you think you have an advanced sleep phase and want to shift it back you should try to view a large amount of bright light in the evening (TVs, computers, and specially designed light boxes

can be helpful with this), while making sure to wake up to a very dark room in the morning, and remaining in mostly darkness until the desired wake up time.

So far we've shown that elderly sleep is indeed rather similar to sleep in younger folk. Sleep is on the whole pretty fine for most elders, and when it's not it's often just other health factors that are the main contributing causes. But is there actually anything different structurally about elderly sleep? The answer is yes.

The difference exists in the amount of slow-wave sleep (SWS), or deep sleep. SWS dominates the first third of the night and is the period of sleep that's crucial for emitting growth hormones. Intuitively then, younger folk--babies, children, and teenagers--have a lot of SWS. Just as intuitively, there is considerably less SWS in older individuals, and the amount continues to drop off with age.

Take a look at this graph for a visual: 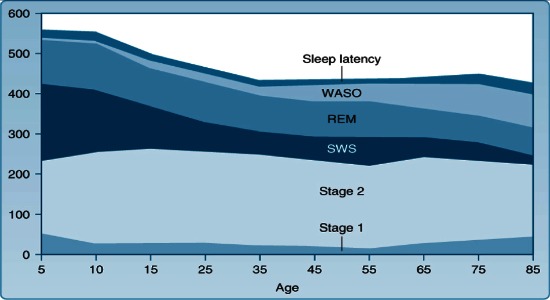 Time in minutes per night a sleeper spends in various stages of sleep at different ages. Notice how SWS, or slow-wave sleep, decreases sharply after the teenage years, and even more in old age. (n=3557, ages 5-102 years) Credit Elsevier Science.

While overall sleep time stays pretty constant after around 30, that SWS column really narrows quite a bit after about 55, and especially after age 65. Additionally, not only does the SWS decrease in duration, but it also changes somehow characteristically as well.

The name slow-wave sleep is derived from the nature of the brain waves emitted during this stage of sleep. SWS consists of very long, slow delta waves, but these delta waves get much smaller in amplitude as we get older. Check out the comparison to a 15-year-old in the graph below. 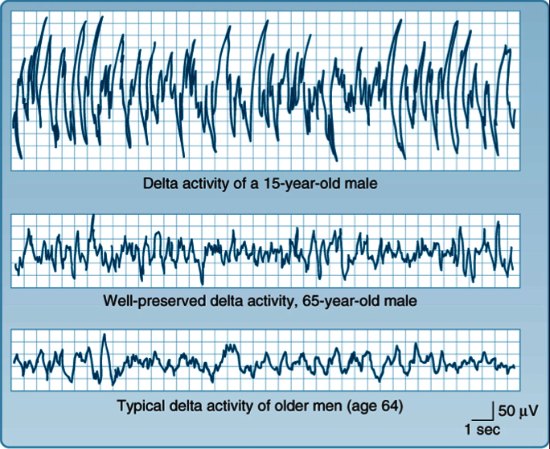 As you can see, the differences in amplitude of the waves of the 15-year-old and those of the 65-year-old are quite marked. There are a few reasons why this may be, but one of them is a possibility that has less to do with the waves themselves and more to do with the measurement of them.

As we get older our brains shrink in overall size just slightly. This increases the distance between the brain and the scalp, also letting more fluid fill the space in between. It's possible that this change makes the EEG (brain wave recordings using electrodes) signal weaker, thus diminishing the size of the waves on the readout. However, this likely doesn't account for all of the drastic change, and the rest may have something to do with the lesser need for growth during this stage in old age.

Go from Elderly Sleep to our Sleep Essentials Mini-Guide