Vital Information About Sleepwalking
A Brochure 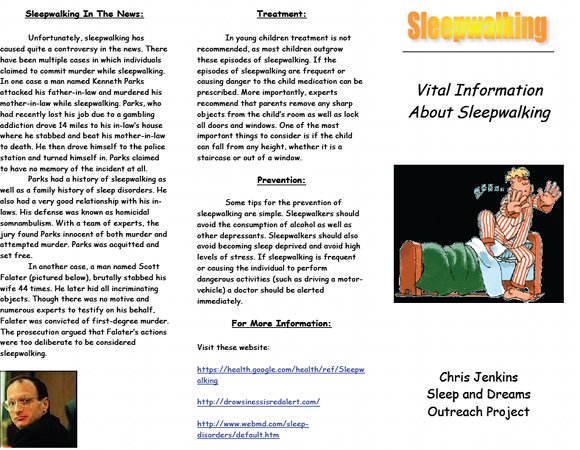 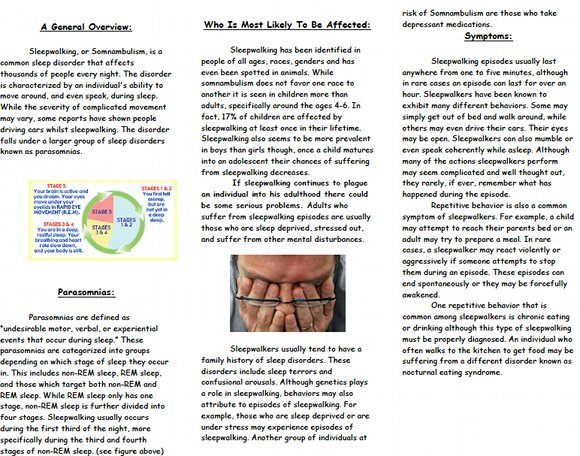 Sleepwalking, or Somnambulism, is a common sleep disorder that affects thousands of people every night. The disorder is characterized by an individual's ability to move around, and even speak, during sleep. While the severity of complicated movement may vary, some reports have shown people driving cars whilst sleepwalking. The disorder falls under a larger group of sleep disorders known as parasomnias.

Parasomnias are defined as "undesirable motor, verbal, or experiential events that occur during sleep." These parasomnias are categorized into groups depending on which stage of sleep they occur in. This includes non-REM sleep, REM sleep, and those which target both non-REM and REM sleep. While REM sleep only has one stage, non-REM sleep is further divided into four stages. Sleepwalking usually occurs during the first third of the night, more specifically during the third and fourth stages of non-REM sleep. (see figure above)

Who is most likely to be affected

Sleepwalking has been identified in people of all ages, races, genders and has even been spotted in animals. While somnambulism does not favor one race to another it is seen in children more than adults, specifically around the ages 4-6. In fact, 17% of children are affected by sleepwalking at least once in their lifetime. Sleepwalking also seems to be more prevalent in boys than girls though, once a child matures into an adolescent their chances of suffering from sleepwalking decreases.

If sleepwalking continues to plague an individual into his adulthood there could be some serious problems. Adults who suffer from sleepwalking episodes are usually those who are sleep deprived, stressed out, and suffer from other mental disturbances.

Sleepwalking episodes usually last anywhere from one to five minutes, although in rare cases an episode can last for over an hour. Sleepwalkers have been known to exhibit many different behaviors. Some may simply get out of bed and walk around, while others may even drive their cars. Their eyes may be open. Sleepwalkers can also mumble or even speak coherently while asleep. Although many of the actions sleepwalkers perform may seem complicated and well thought out, they rarely, if ever, remember what has happened during the episode.

Repetitive behavior is also a common symptom of sleepwalkers. For example, a child may attempt to reach their parents bed or an adult may try to prepare a meal. In rare cases, a sleepwalker may react violently or aggressively if someone attempts to stop them during an episode. These episodes can end spontaneously or they may be forcefully awakened.

One repetitive behavior that is common among sleepwalkers is chronic eating or drinking although this type of sleepwalking must be properly diagnosed. An individual who often walks to the kitchen to get food may be suffering from a different disorder known as nocturnal eating syndrome.

Sleepwalking in the news

Unfortunately, sleepwalking has caused quite a controversy in the news. There have been multiple cases in which individuals claimed to commit murder while sleepwalking. In one case a man named Kenneth Parks attacked his father-in-law and murdered his mother-in-law while sleepwalking. Parks, who had recently lost his job due to a gambling addiction, drove 14 miles to his in-law's house where he stabbed and beat his mother-in-law to death. He then drove himself to the police station and turned himself in. Parks claimed to have no memory of the incident at all.

Parks had a history of sleepwalking as well as a family history of sleep disorders. He also had a very good relationship with his in-laws. His defense was known as homicidal somnambulism. With a team of experts, the jury found Parks innocent of both murder and attempted murder. Parks was acquitted and set free.

In another case, a man named Scott Falater (pictured below), brutally stabbed his wife 44 times. He later hid all incriminating objects. Though there was no motive and numerous experts to testify on his behalf, Falater was convicted of first-degree murder. The prosecution argued that Falater's actions were too deliberate to be considered sleepwalking.

In young children treatment is not recommended, as most children outgrow these episodes of sleepwalking. If the episodes of sleepwalking are frequent or causing danger to the child medication can be prescribed. More importantly, experts recommend that parents remove any sharp objects from the child's room as well as lock all doors and windows. One of the most important things to consider is if the child can fall from any height, whether it is a staircase or out of a window.

Some tips for the prevention of sleepwalking are simple. Sleepwalkers should avoid the consumption of alcohol as well as other depressants. Sleepwalkers should also avoid becoming sleep deprived and avoid high levels of stress. If sleepwalking is frequent or causing the individual to perform dangerous activities (such as driving a motor-vehicle) a doctor should be alerted immediately.