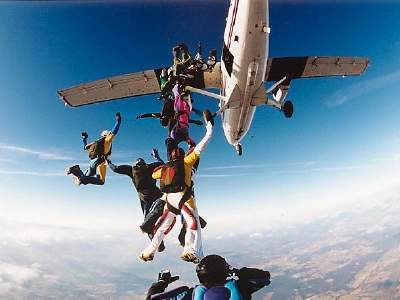 Last night, I dreamed that my friend and I were a pair of band robbers planning to rob a bank for money. We were planning our escape when suddenly, we decided it would be a good idea to parachute into the bank (which had no ceiling), because then no one would see us once we landed inside.

Next, we were on a small jet flying over mountain ranges with snowcaps and trees. The plane was rickety and had old-looking propellers. Suddenly, the engine started to sputter and the plane faltered, dropping in elevation.

We knew we had to jump out of the plane using our parachuting gear, but we had no idea how to do it, since we had no instructor there with us on the plane and the plane also (oddly) had no pilot. We jumped.

Instead of jumping out of the plane, we were jumping into a pond of clear, blue water off of a rope swing. As we hit the pond, though, the pond became an Olympic sized swimming pool, with lanes and everything.

I looked at my friend in confusion, but she started yelling at me, "What are you doing?!? Why aren't you swimming? We're in a race for Christ's sake!"

I looked around and I was in the midst of a full-on swim race, with large men in swim caps and speedos splashing past me. I started trying to swim too, but even though I pushed my hands through the water, it was as if they were paddling through air, and I couldn't move forward.

Frustrated, I started kicking harder but had the same results. I knew I was going to lose the race. I started sinking, feeling that falling sensation behind my belly button, and then I woke up.