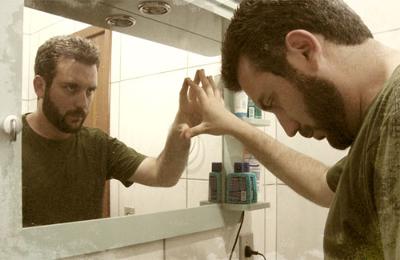 As far as I can remember, I've only had a handful of lucid dreams in my lifetime. After watching the film Inception, I started doing more reading about them on the Internet. I found what I read fascinating.

About one month after doing that reading, I had a lucid dream. It began in a small motel room where I was lying in bed. The room was dark but had ambient light coming in through the window. For some unknown reason I felt dread as I lay there.

This frightened me even further. Suddenly, though, I remembered reading about how mirrors don't always work correctly in dreams, which can trigger the realization of dreaming. That's exactly what happened in my case.

Now in a lucid state, I starting contorting my face into different shapes, experimenting with the image in the mirror. The whole time my reflection did not change. I remember thinking, "Wow, I'm lucid dreaming now."

Even though I knew I was dreaming, the dark, unfamiliar setting coupled with the freakishness of the mirror continued to frighten me, and I wanted to wake up. I tried throwing myself against the wall, which only caused my shoulder to hurt. I then remembered previously reading that pain could still be felt in dreams.

Next, I tried flailing my arms and screaming as loudly as I could to try to wake myself up. I was screaming so loudly that I thought I would rupture my vocal cords. I did end up waking up; just as I opened my eyes I actually heard a low moan come from my mouth. I remember the strange transition of feeling and hearing myself scream so wildly in my dream, yet actually only making a tiny sound.

That happened I guess a year ago, and I haven't had another lucid dream since, but I'm hoping!