My Five-year-old Brother Sleepwalks Then Pees!! 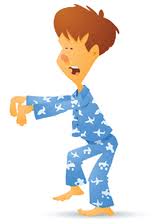 About 6 months ago, I was home watching my youngest brother, who is five, while the rest of my family was out of the house for the night.

Around 9 pm that night, he fell asleep next to me. He was asleep for probably half an hour to an hour, then he gets up walks over to our gate, and goes pee. The gate was probably 10 to fifteen feet away. I couldn't believe that he did that.

I didn't know he was sleep walking until I called his name, a couple of times. But he didn't answer, he just kept peeing.

I got up and looked at him. His eyes were closed. When he finished, he zipped up his pants, and stood there. Very carefully I moved him back to the couch. He was still asleep. While cleaning his mess up, I called my mom to tell her what happened. But she didn't believe me, she said he was probably messing with you or something. I told her no he wasn't. Cause I was calling his name many times, and he didn't say anything.

On October 22, 2011, around 11:30 pm, I'm in my room, I hear my brother yelling at my younger brother. I asked him what was going on. He told me that he was asleep on the couch, and he got up, and walked into the computer room, where Jordan and he were, and started peeing. He started yelling at him cause he peed all over the floor.

I told him he was probably sleep walking again. He said he wasn't cause when he came in, he asked him, what he was doing and he said nothing and started peeing in the computer room.

Join in and write your own page! It's easy to do. How? Simply click here to return to Sleepwalking Stories.