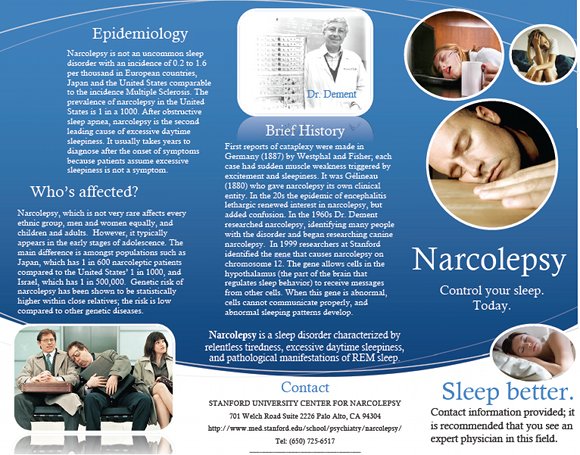 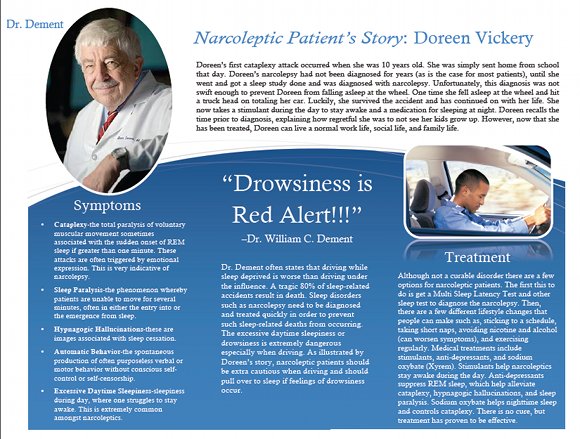 Narcolepsy is not an uncommon sleep disorder with an incidence of 0.2 to 1.6 per thousand in European countries, Japan and the United States comparable to the incidence Multiple Sclerosis. The prevalence of narcolepsy in the United States is 1 in a 1000. After obstructive sleep apnea, narcolepsy is the second leading cause of excessive daytime sleepiness. It usually takes years to diagnose after the onset of symptoms because patients assume excessive sleepiness is not a symptom.

Narcolepsy, which is not very rare affects every ethnic group, men and women equally, and children and adults. However, it typically appears in the early stages of adolescence. The main difference is amongst populations such as Japan, which has 1 in 600 narcoleptic patients compared to the United States' 1 in 1000, and Israel, which has 1 in 500,000. Genetic risk of narcolepsy has been shown to be statistically higher within close relatives; the risk is low compared to other genetic diseases.

First reports of cataplexy were made in Germany (1887) by Westphal and Fisher; each case had sudden muscle weakness triggered by excitement and sleepiness. It was Gélineau (1880) who gave narcolepsy its own clinical entity. In the 20s the epidemic of encephalitis lethargic renewed interest in narcolepsy, but added confusion. In the 1960s Dr. Dement researched narcolepsy, identifying many people with the disorder and began researching canine narcolepsy. In 1999 researchers at Stanford identified the gene that causes narcolepsy on chromosome 12. The gene allows cells in the hypothalamus (the part of the brain that regulates sleep behavior) to receive messages from other cells. When this gene is abnormal, cells cannot communicate properly, and abnormal sleeping patterns develop.

Doreen's first cataplexy attack occurred when she was 10 years old. She was simply sent home from school that day. Doreen's narcolepsy had not been diagnosed for years (as is the case for most patients), until she went and got a sleep study done and was diagnosed with narcolepsy. Unfortunately, this diagnosis was not swift enough to prevent Doreen from falling asleep at the wheel. One time she fell asleep at the wheel and hit a truck head on totaling her car. Luckily, she survived the accident and has continued on with her life. She now takes a stimulant during the day to stay awake and a medication for sleeping at night. Doreen recalls the time prior to diagnosis, explaining how regretful she was to not see her kids grow up. However, now that she has been treated, Doreen can live a normal work life, social life, and family life.

Cataplexy-the total paralysis of voluntary muscular movement sometimes associated with the sudden onset of REM sleep if greater than one minute. These attacks are often triggered by emotional expression. This is very indicative of narcolepsy.

Dr. Dement often states that driving while sleep deprived is worse than driving under the influence. A tragic 80% of sleep-related accidents result in death. Sleep disorders such as narcolepsy need to be diagnosed and treated quickly in order to prevent such sleep-related deaths from occurring. The excessive daytime sleepiness or drowsiness is extremely dangerous especially when driving. As illustrated by Doreen's story, narcoleptic patients should be extra cautious when driving and should pull over to sleep if feelings of drowsiness occur.

Although not a curable disorder there are a few options for narcoleptic patients. The first this to do is get a Multi Sleep Latency Test and other sleep test to diagnose the narcolepsy. Then, there are a few different lifestyle changes that people can make such as, sticking to a schedule, taking short naps, avoiding nicotine and alcohol (can worsen symptoms), and exercising regularly. Medical treatments include stimulants, anti-depressants, and sodium oxybate (Xyrem). Stimulants help narcoleptics stay awake during the day. Anti-depressants suppress REM sleep, which help alleviate cataplexy, hypnagogic hallucinations, and sleep paralysis. Sodium oxybate helps nighttime sleep and controls cataplexy. There is no cure, but treatment has proven to be effective.