The following is a student-made brochure created for Stanford Sleep and Dreams. If it is difficult to read using the images, you may view the full text here. 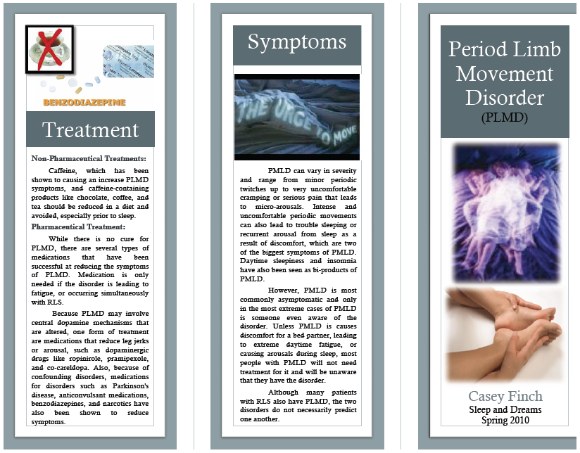 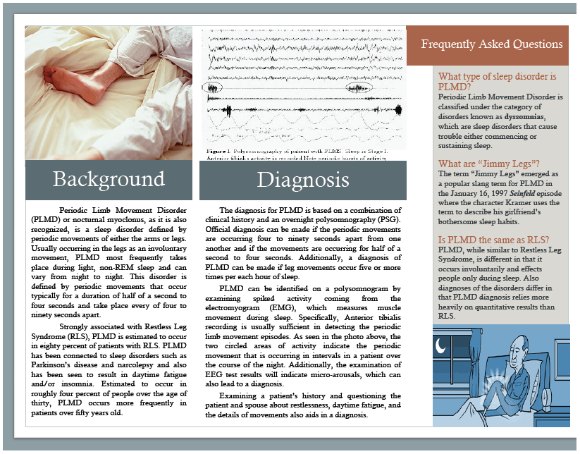 Periodic Limb Movement Disorder (PLMD) or nocturnal myoclonus, as it is also recognized, is a sleep disorder defined by periodic movements of either the arms or legs. Usually occurring in the legs as an involuntary movement, PLMD most frequently takes place during light, non-REM sleep and can vary from night to night. This disorder is defined by periodic movements that occur typically for a duration of half of a second to four seconds and take place every of four to ninety seconds apart.

Strongly associated with Restless Leg Syndrome (RLS), PLMD is estimated to occur in eighty percent of patients with RLS. PLMD has been connected to sleep disorders such as Parkinson's disease and narcolepsy and also has been seen to result in daytime fatigue and/or insomnia. Estimated to occur in roughly four percent of people over the age of thirty, PLMD occurs more frequently in patients over fifty years old.

PMLD can vary in severity and range from minor periodic twitches up to very uncomfortable cramping or serious pain that leads to micro-arousals. Intense and uncomfortable periodic movements can also lead to trouble sleeping or recurrent arousal from sleep as a result of discomfort, which are two of the biggest symptoms of PMLD. Daytime sleepiness and insomnia have also been seen as bi-products of PMLD.

However, PMLD is most commonly asymptomatic and only in the most extreme cases of PMLD is someone even aware of the disorder. Unless PMLD is causes discomfort for a bed partner, leading to extreme daytime fatigue, or causing arousals during sleep, most people with PMLD will not need treatment for it and will be unaware that they have the disorder.

Although many patients with RLS also have PLMD, the two disorders do not necessarily predict one another.

PLMD can be identified on a polysomnogram by examining spiked activity coming from the electromyogram (EMG), which measures muscle movement during sleep. Specifically, Anterior tibialis recording is usually sufficient in detecting the periodic limb movement episodes. As seen in the photo above, the two circled areas of activity indicate the periodic movement that is occurring in intervals in a patient over the course of the night. Additionally, the examination of EEG test results will indicate micro-arousals, which can also lead to a diagnosis.

Examining a patient's history and questioning the patient and spouse about restlessness, daytime fatigue, and the details of movements also aids in a diagnosis.

Non-Pharmaceutical Treatments:
Caffeine, which has been shown to cause an increase in PLMD symptoms, and caffeine-containing products like chocolate, coffee, and tea should be reduced in a diet and avoided, especially prior to sleep.

Pharmaceutical Treatment:
While there is no cure for PLMD, there are several types of medications that have been successful at reducing the symptoms of PLMD. Medication is only needed if the disorder is leading to fatigue, or occurring simultaneously with RLS.

Because PLMD may involve central dopamine mechanisms that are altered, one form of treatment are medications that reduce leg jerks or arousal, such as dopaminergic drugs like ropinirole, pramipexole, and co-careldopa. Also, because of confounding disorders, medications for disorders such as Parkinson's disease, anticonvulsant medications, benzodiazepines, and narcotics have also been shown to reduce symptoms.

What type of sleep disorder is PLMD?

Periodic Limb Movement Disorder is classified under the category of disorders known as dyssomnias, which are sleep disorders that cause trouble either commencing or sustaining sleep.

What are "Jimmy Legs"?

The term "Jimmy Legs" emerged as a popular slang term for PLMD in the January 16, 1997 Seinfeld episode where the character Kramer uses the term to describe his girlfriend's bothersome sleep habits.

Is PLMD the same as RLS?

PLMD, while similar to Restless Leg Syndrome, is different in that it occurs involuntarily and effects people only during sleep. Also diagnoses of the disorders differ in that PLMD diagnosis relies more heavily on quantitative results than RLS.