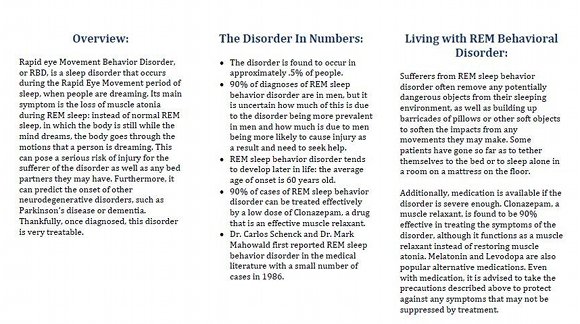 Rapid eye Movement Behavior Disorder, or RBD, is a sleep disorder that occurs during the Rapid Eye Movement period of sleep, when people are dreaming. Its main symptom is the loss of muscle atonia during REM sleep: instead of normal REM sleep, in which the body is still while the mind dreams, the body goes through the motions that a person is dreaming. This can pose a serious risk of injury for the sufferer of the disorder as well as any bed partners they may have. Furthermore, it can predict the onset of other neurodegenerative disorders, such as Parkinson's disease or dementia. Thankfully, once diagnosed, this disorder is very treatable.

Sufferers from REM sleep behavior disorder often remove any potentially dangerous objects from their sleeping environment, as well as building up barricades of pillows or other soft objects to soften the impacts from any movements they may make. Some patients have gone so far as to tether themselves to the bed or to sleep alone in a room on a mattress on the floor.

Additionally, medication is available if the disorder is severe enough. Clonazepam, a muscle relaxant, is found to be 90% effective in treating the symptoms of the disorder, although it functions as a muscle relaxant instead of restoring muscle atonia. Melatonin and Levodopa are also popular alternative medications. Even with medication, it is advised to take the precautions described above to protect against any symptoms that may not be suppressed by treatment.

REM sleep behavior disorder is part of a class of sleep disorders known as parasomnias, which deal with abnormal behavior during sleep. Most of these disorders, such as sleepwalking, have been found to occur during the non-dreaming, NREM phase of sleep, while REM sleep behavior disorder unusually occurs during the REM period of sleep. During this period, the brain is normally very active and involved in dreams, but the body is experiencing paralysis. This ensures that while the brain may be going through what seem to be entirely real experiences during dreaming, the body remains still. With REM sleep behavior disorder, that paralysis is gone, so that any action that a person takes in a dream will be acted out by their body. It appears that an issue in the brain stem may account for this disorder.

For more information on REM sleep behavior disorder and its treatment, contact the American Academy of Sleep Medicine at (708) 492-0930.