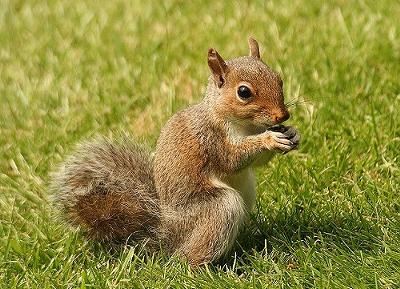 So, I need to start by giving some background information that definitely provoked this dream.

On thursday night, my friend had her dad come to the dorm to drop off a futon couch and a tv. He then offered to take her for a Trader Joe's run and coincidentally, my fridge was empty. My friend invited me to join and I was more than willing to accept her offer! We entered Town and Country and were minding our own business trying to find a parking spot when all of the sudden I spotted a small shadowy figure in the road and screamed, "STOP!" My friend's dad stopped the car immediately and there was another car that had obviously seen this figure and had slowed to a stop as well. The figure was no other than an injured squirrel, painfully struggling to get out of the road. The squirrel was stumbling and made it to the surrounding bushes. Once we parked, we decided to check up on the squirrel after our Trader Joe's run and if he was still in pain, we would take him to the Humane Society or my friend's father would shelter the squirrel at his house to comfort him during his pain (instead of being picked to death by a number of predators at night). We quickly put our bags into the car and grabbed a cloth bag (those recyclable ones for a dollar or so) and walked over to the bush. The squirrel was still there, lying down and not moving. My friend's father gently picked him up and put the squirrel into the bag I was carrying. The squirrel was just laying in the bag, breathing so slowly and almost gasping for air. I was devastated, feeling hopeless because there was nothing I could do. My friend's father decided to take him home after he dropped us off, to give him a comfortable and warm place to pass away. One hour later, "Rocky" the squirrel passed away.

And now, for the dream.

Some of my friends (can't depict who, but there were a number of them) and I were walking by the frat, KA. We were walking over a random wooden bridge when instantly, thousands of squirrels appeared and were scattering EVERYWHERE! I am not overreacting: there were THOUSANDS. We were all stunned; there were so many! In the midst of this rodent madness, there was one squirrel that was at a stand still and was staring at me. Fortunately, I had some trail mix in my purse and decided to leave it there for the squirrels. As all of my friends were laughing and walking away, I had a slow pace and was watching this one squirrel timidly go for the food I had left for him. Time had elapsed (don't know how long), and I was walking home after the nightly adventure when I felt as thought something had been following me. I would turn around and see the bushes move, hear scurrying-like noises, etc. I soon noticed that the squirrel from the bridge was following me. I entered my dorm room and got some more trail mix and left it outside of the door for the squirrel. The days seemed to fly by, and the squirrel had gained up the confidence to come into my dorm room! The squirrel would sleep on my bed with me in my hand. I even built him a stair-like contraption to go out the window and down the tree. My pet squirrel was awesome. Then, one night, someone entered my room at around 12:30 a.m. I do not know who this girl was, but she grabbed my squirrel out of my hand by the tail and hurried to the window. I was so alarmed and was extremely worried. I was screaming, "What are you doing to him!?" This rude girl would not answer. I kept seeing the squirrel look at me and was squirming and trying to escape! The rude girl smirked at me and proceeded to drop my squirrel out of my two-story window. I screamed so loudly! Then, I ran over to her and threw her on the ground. I won't go into too much detail, but I can tell you that I absolutely kicked this girl's a**, even with my broken wrist. Afterwards, I looked out and down the window and saw my squirrel on the ground and he wasn't moving at all. I was crying so hard as I ran down the stairs and out the door to see if he was okay. When I got to him, my squirrel was slowly opening and closing his eyes and was in the EXACT same condition as the "Town and Country" squirrel was. After that immediate realization, I woke up.