Written by Kevin Morton with adaptations from the Stanford Sleep Book

You may think you can tell when someone falls asleep just by looking at them, and sometimes you may be able to, but can you pin it down to the exact second? Sleep onset is actually a really intriguing topic to consider. What exactly happens at that critical moment when wakefulness suddenly turns into sleep?

Sleep researchers have pinned it down to a few key things. They're listed below, and you can click on each link to jump lower in the page and find out more:

When the functional state of the brain shifts from wake to sleep, the most reliable and accurate indicator of this sleep onset moment is a characteristic change in brain wave patterns.

The word hypnagogia is a perfect one to talk about in a discussion of sleep onset, as it refers precisely to the transitional state between wakefulness and sleep.

All sorts of really interesting things can happen during this brief state, including what's known as hypnagogic hallucinations.

More crazily intriguing things that happen at sleep onset? Lucid dreaming and sleep paralysis are definitely worth reading about.

When we're awake our brain generates a highly characteristic pattern known as an alpha rhythm. A brain wave pattern qualifies as an alpha rhythm if its oscillation is between 8 and 12 cps (cycles per second, or hertz, as is now commonly used).

Interestingly, while an alpha rhythm is present throughout wakefulness it actually is enhanced and even easier to detect when we close our eyes. This is wonderfully convenient because, one, closing ones eyes necessarily precedes sleep and, two, alpha waves are not present during sleep. So when looking at the brain waves of someone resting their eyes during polysomnography, it's that much easier for a sleep researcher to see the change from alpha rhythm to no alpha rhythm.

How easy is it? Well, some individuals have less prominent alpha rhythm that's a bit harder to make out, making the brain wave identification of sleep onset a little less precise. But within a few seconds, sleep onset can be unambiguously determined using brain waves in any case. Check out what it looks like below:

The red arrow in the brain waves above pinpoints the moment of sleep onset. To the left of the arrow the subject is awake and his or her brain emitting large, sharp alpha rhythms on both EEG measuremens. To the right of the arrow those rhythms cease to exist and the subject is asleep. Just FYI, "C3/A2" and "O1/A2" just signify the different areas of the brain where these readings are being taken. Alpha rhythms tend to show up most prominently in the occipital area, or O1. You can see the alpha rhythm is more sharp in this measurement than in C3, which is near the top of the skull.

Another common feature of sleep onset is the occurence of slow, back and forth eye movements. These movements sometimes begin a few seconds before the EEG change in alpha rhythm if the eyes are closed leading up to sleep, and generally continue for several minutes after sleep onset.

Perceptual disengagement from the environment, one of the two main defining qualities of sleep, is the most salient feature of sleep onset. The occurence of sleep initiates a total lack of conscious awareness of the outside world for any stimuli that doesn't elicit arousal. So when a stimulus fails to elicit a response it would always elicit in the waking state, we know that person is asleep. Check out the experiment below to get a better sense of what I mean here.

To test just how dramatic the change in consciousness is at the moment of sleep, researchers once conducted a series of experiments involving strobe lights, a microswitch, and tape.

Adult volunteers took turns laying down on a gurney with an extremely bright (we're talking 50,000 lux) strobe light hanging six inches above their eyes. The researchers taped the participants eyelids open, and put a small switch against their finger with the instructions that every time the participants saw the strobe light flash they must press the switch. Easy enough, right? I mean, we're talking about a 50,000 lux strobe light flashing 6 inches in front of your face. How could you miss that? 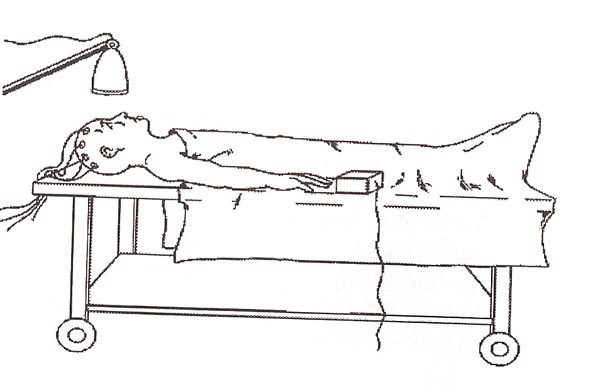 Well, despite having their eyes open the entire time, the participants did miss the strobe light flashes whenever they were asleep while they went off. When brain wave recordings being taken simultaneously showed the participants to be awake, not one failed to press the switch after a flash, without exception.

But whenever the brainwave patterns showed the participant had slipped to non-REM stage 1 sleep (the lightest stage of sleep), the subjects failed to press the switch and even denied that there had been a strobe flash after the fact! This was invariably true even if the flash followed the brainwave change by less than a second, or in other words, right after sleep onset.

Talk about amazing evidence of our sensory disengagement while we sleep! But how is it exactly that we can be completely unaware that a 50,000 lux strobe light flashed half a foot ahead of our open eyeballs? Further research has shown that the electrical response of our relay neurons responsible for transmitting sensory information to appropriate parts of the brain actually almost completely disappears during sleep. The brain doesn't get told because the messengers can't deliver the message!

"This is clear evidence that an independent brain process dramatically alters the processing of sensory information in association with the moment of sleep onset, but not before this moment."

Go from Sleep Onset to "What Is Sleep?" The Sleep Essentials guide's parent article to this page.

What happens after Sleep Onset? Go here to learn about NREM Sleep