The Gorilla, The Chicken Man and the Amish 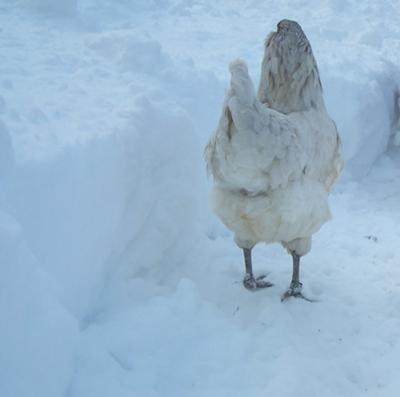 This dream is one that I always remember and laugh about because it was just hilarious and made no sense like most of the dreams I have.

So I'm flying above a street in a general suburban area and for some reason I'm being chased by a gorilla (doesn't he know he can't fly? silly gorilla). But then the gorilla turns into an tiny old black woman who would probably make an adorable grandmother if she weren't chasing after me. Somehow she catches me and holds me captive in her small and cluttered house that was also long lengthwise but narrow with piles of useless, hoarded objects.

I keep trying to gain flight by running up and down the length of this crazy old nut's house before she eats me or something. Eventually she goes into another room and I'm able to get into the air and narrowly escape through a tiny basement window (like there was grass directly below it because apparently the lady lives underground all of a sudden) that I couldn't possibly fit through in real life. Shaking her fist like an angry old man telling the kids to get off his lawn, the gorilla lady is left yelling at me from the tiny window.

I fly higher into the air and emerge above a grassy field, into an intensely foggy space through which I can only see telephone poles and wires. Soon after, the surrounding fog becomes thicker, turning into clouds but instead of becoming completely blind and just dying right there in the sky like some stupid bird, I stumble into a zoo in the clouds. I guess Jesus enjoys a good monkey dance contest; I would too. Only I didn't specifically see any monkeys because I was too distracted by something else. Believe me, this was no ordinary zoo; apart from the fact that it was in the sky near a crazy gorilla lady's underground trailer. There were other people at this zoo, looking around and admiring the strange creatures in the otherwise empty cages as if they were some bizarre Narnian prostitutes there to entertain some huge pervert.

Guys, this was a fucking scary zoo. I made my way over to the cage I was distracted by earlier. In it was some kind of weird, giant mutant chicken who looked like it was either about to crumple over and die like one of those dolls who falls apart and come back together at the pull of a string, or start doing an intimidating techno-chicken dance. This was some intense shit - but wait! There's a guy in there! That's no chicken at all! That's a dude who turned out to be my older friend who's name I either never knew or can't remember.

I let him out of the cage and ask him what the fuck he's doing dressed as a chicken in a freakshow human zoo in the sky near a crazy old gorilla lady's underground trailer. Apparently that's his job and that maybe the lady thought I escaped from the weird pervert zoo. I told him I thought that was retarted and then we got the fuck out of that place and walked through the clouds into another town that I seemed to recognize and feel safer in except everything and everyone was Amish. It's like I had travelled back into a time when that shit was considered normal, through a weird human sky zoo near a perverted old gorilla lady's underground trailer.

Anyways, we strolled around town alongside people in funny Amish hats and horse-carts after my nameless chickeny friend took off his chicken suit and continued to walk around without a shirt. He was cute, but the chicken thing creeped me out so I left him and some other guy who I just remebered was with us in Amishtown and woke up feeling very confused.