Written by Kristen Glass, Spring 2010, with contributions from Kevin Morton

When track star Katie Drentlaw ran her SUV off the road just 12 miles from her house and died on April 25, 1998, one could have jumped to the conclusion that her accident was another tragic underage drinking and driving fatality. However, the 18-year-old Prior Lake High School student had just finished a track meet in Des Moines, Iowa and had been losing sleep over choosing which college to sign with for a track scholarship. Drowsy driving--not drunk driving--caused the crash. 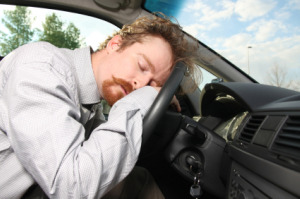 Drinking and driving gets the lion's share of attention in the media and general public conversation, but sleep deprivation and driving continuously proves itself to be an equally, if not greater, concern for the everyday commuter. From cars, taxis, buses, airplanes, boats, and trains, safety during transportation and sleep are joined at the hip.

Kate Drentlaw is just one example of the many Americans who die due to drowsy driving each year. According to the National Highway Traffic Safety Administration (NHTSA), approximately 1,500 people die in the more than 100,000 accidents that are caused annually by drowsy driving in the United States.

And these statistics are modest. The numbers depend on the admissions of the drivers, who may not remember exactly what happened or may not be forthcoming with admitting falling asleep. It's impossible to quantify just how many other accidents and deaths are less ostensibly contributed to by fatigue.

Additionally, when it comes to transportation and sleep drowsy driving accidents are not just limited to the road. Tired pilots have been recorded to cause accidents in aircrafts as well, something that studies done by NASA and stricter regulations on how long pilots can travel without sleep have sought to address.

Ship captains, taxi drivers, bus drivers, and other passenger-carrying crafts have all exemplefied drowsy driving accidents before as well, leading us to see that the dangers of drowsiness does not stop at the driver alone. Drowsiness is a threat to un passengers alike. Consequently, we would be well suited as a society to become more aware of the potentially dangerous relationship between transportation and sleep. 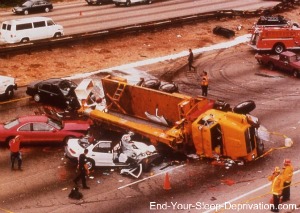 Long-haul truck drivers are particularly at risk to fatigue-related accidents, both because of the nature of their lengthy trips and an increased prevalence of sleep apnea in the truck driving population.

Why is drowsy driving such a problem? When the 20th century brought us automobiles and the means to get around at high speeds it also brought us more of a 24/7 world and a redefinition of what the night meant for us. It became easier to put sleep lower on the priority list and few people accounted for the dangerous potential of transportation and sleep deficits that came with a new electricity-powered lifestyle.

Consistently placing sleep at a low level of importance can result very quickly in a cumulative sleep debt that can not only impair things like reaction time, but also lead to unintended microsleeps

and full on sleep episodes in situations where such compromises in attention are extremely dangerous--like when driving.

When strong enough, such a sleep debt makes its presence known by dragging us into feelings of sleepiness and a tendency towards falling asleep, which is exacerbated during tasks that are neither physically demanding nor mentally challenging. Who at one time or another has not experienced "highway hypnosis"? You know the symptoms: your eyelids begin to get heavy, road lines blur, you can't recall explicitly your driving from the last few minutes, and you have to crank up the radio and put the windows down to stay awake.

All too frequently individuals who never thought it would happen to them have fallen asleep in instances like these. During situations of Òhighway hypnosisÓ a person's psychological alertness diminishes and their sleep debt is more capable of taking over, leading to danger that must not be ignored.

Right now you may be thinking "How can I prevent myself from getting drowsy behind the wheel?" The answers are simple and straightforward, but they must be adhered to to make a significant difference in your safety. First, remember the phrase "Drowsiness is Red Alert!" When you start to feel tired while driving, acknowledge that being sleepy while driving is dangerous and plan to pull off the road at the nearest available stop or exit to take a nap. (Learn more about the life-saving powers of the Drowsiness Is Red Alert cue in phrase here.)

It's also a great idea to anticipate situations like these and practice getting extra sleep or taking naps before long trips. Make a habit of reducing your sleep debt, and thus the pressure your body puts on you to sleep, before going on drives.

Caffeine takes about a half hour from when you put it in your system to have an effect on your alertness. Thus, if you consume some just before napping, it should (1) not weaken your ability to nap, and (2) make you feel even more alert when you wake up and it has kicked in.

If you want an even more powerful supplement to your naps, a study from the University of Loughborough recommends that drivers drink a caffeinated beverage before short naps for added effectiveness. Called a "caffeine nap," this strategy reduces the factor of drowsy driving related incidents by a further factor of three to four times compared to drinking coffee alone.

Further, you can start to incorporate other good sleep habits into your life to ensure that you are feeling awake and vitalized while driving. For helpful information on a few such good sleep habits, visit our page addressing what to do when having trouble sleeping.

In addition to the everyday car driver, developing good sleep habits is especially important for your airplane pilots as well. According to a study released by NASA in 1994, pilots who nap have a median 16% improvement in reaction times and a 34% decrease in lapses of awareness during flights. For the group of flight crews in the study allowed to take planned naps during their flight there were no microsleeps during the last 30 minutes of the trip. Moreover, other studies have proved that it is safer for a pilot to engage in a planned nap in the cockpit while another pilot is awake than not napping at all.

It's a part of life that you're tired some days--we all experience it. However, there are ways to make your daily transportation less risky and more pleasurable during these times. You have places to go and activities to do, which is why it is even more important for you to stop, rest if need be to take care of yourself, and make sure that you complete your journey safely and successfully. You can save lives with this mindset. Yours included.

The American Automobile Association (AAA) released in November 2010 a drowsy driving report entitled Asleep at the Wheel: The Prevalence and Impact of Drowsy Driving.

The Washington Post reported on AAA's detailed study with a Nov. 8th article of their own overviewing the toll of drowsy driving, as well as a few paragraphs on airline, bus, and train safety.