Sleeping On The Ceiling: What Is It Like Sleeping In Space?

What does your dad do?

What?! No waaaaayyyyy, that's so cool!!

Whenever I tell someone what my dad's job is, this is usually the reaction they have.

People love asking what he did to become an astronaut, whether he went to the moon or not (just FYI, humans haven't been to the moon since 1972...so, no), and what zero gravity feels like.

Rarely do people wonder about sleeping in outer space. 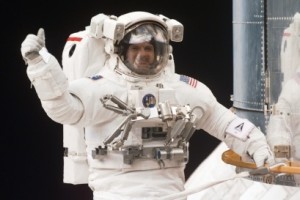 But nowadays on Earth, the necessity of getting a sufficient amount of sleep is often overlooked and not a high priority. After all, we've got people to see, places to go, papers to write.

You know how it is.

We often underestimate the importance of sleep, and then we can't focus in class or fall asleep at the wheel and become a danger to others on the road. As we get less and less sleep, our sleep debt increases.

"A large sleep debt impairs our mood, our sense of well-being, our energy, and our intellectual function."

This is a problem on Earth, but in space, it is especially serious. Astronauts traveling 17,500 mph around the Earth, surrounded by a vacuum and no oxygen, want to be alert at all times in case of an emergency. They practice emergency protocols, but when people are sleepy their mental faculties aren't as sharp and they make mistakes.

Of course, this is the case with everyone, not only astronauts. Athletes who have a large sleep debt will not play to their full potential. However, astronauts on a mission are in constant danger. As my dad says, "everyone's lives depend on proper execution of the emergency response," so sleep is especially important just for survival.

While in space, astronauts must perform complicated tasks with expensive equipment. My dad informs me that the Hubble Space Telescope, which takes pictures of stars, planets, and galaxies far far away, costs around $6 billion. When he and his crew were fixing this telescope in large, clumsy spacesuits, they needed to be well rested and attentive to every detail. They need every ounce of concentration, intellect, and energy during eight hour spacewalks.

So obviously, sleep is extremely important, but astronauts face some curious difficulties sleeping in space that we don't encounter when we hop into bed on Earth. 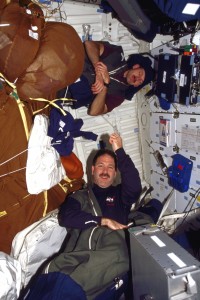 Astronauts can sleep anywhere because there is no gravity in space

In fact, astronauts can't hop into bed...but they can float into bed. There's no gravity, nothing pulling them to the floor. On Earth, you would never consider sleeping upside down and vertical, but in space, there is no up and no down. This means the ceiling and the walls have now become possible spots for an astronaut's sleeping bag.

Velcro becomes an astronaut's best friend, because if we float in space, then sleeping bags do too. Before going to sleep in space, they must strap their sleeping bags to the walls or ceiling. My dad tells me that he awoke one night, disoriented in the zero gravity darkness, because his nose was rubbing against something that turned out to be the opposite wall. He had floated across the room because he had not secured his sleeping bag very well.

Most people also wouldn't like it if they woke up and their arms were eerily floating out in front of them. In space, they will float around unless they are also strapped down or inside the sleeping bag. Additionally, on Earth when we lay our head down on our soft, fluffy pillow, we expect it to stay there. While sleeping in space, astronauts have a seatbelt for their head because otherwise, it would be floating around above the pillow. 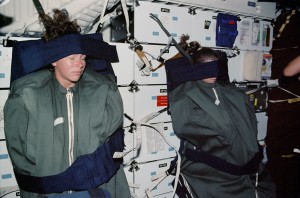 Everything needs to be strapped down when sleeping in space

Even though sleeping bags strapped to a wall hinder most movement, there is no way to prevent floating inside the sleeping bag. My dad described it as floating inside a cocoon, saying that when "you get to one side, you bounce off and head in the opposite direction." We all have our favorite position to sleep in, whether on our side, back, or stomach, but this is impossible in zero gravity. There is no familiar feeling of lying on the firm, comfortable surface of our mattress when sleeping in space.

Another major factor affecting sleep is that "over 50% of astronauts get SAS (Space Adaptation Sickness) when they get to space." This means for usually 1-3 days, astronauts feel nausea and vomit. They are given medicine, but astronauts are hesitant to take sleeping pills because if there is an emergency, they do not want to be impaired by the drug when they wake up.

There are other factors that make it harder to sleep in space that we on Earth may also experience. Rookie astronauts are often very excited to be in space for the first time. Just as thoughts of an important meeting or an exam may keep us up at night, thoughts of family back on Earth, surviving the launch, and the next steps in the mission can make sleep tough for astronauts, my dad reveals.

Finally, there is always the sound of humming computers, and not to mention the other astronauts--microphones have proven that some astronauts do indeed snore in space. The sections in the shuttles are small and generally need to be shared between three or four people. Most astronauts have not had this little privacy since their college dorms! In the Russian Soyuz capsule, there are three seats next to each other. Astronauts must sleep in a sitting position, which is similar to sleeping on an airplane in terms of no room and no privacy. On the International Space Station, astronauts can sleep in small compartments, like closets or telephone booths. However, they will still float around in their sleeping bag. 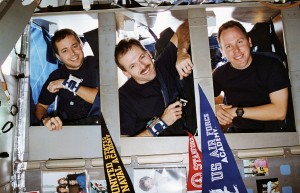 But since sleep is crucial for optimal performance and alertness, NASA is studying the sleep of astronauts in space. My dad recalls keeping a sleep journal, noting down how well he felt he slept: "The results showed that we didn't sleep as well in space."

Technology also proves this to be true. CASPER (Cardiac Adapted Sleep Parameter Electrocardiogram Recorder) is a newly developed vest with sensors and ECG (electrocardiogram) electrodes that monitors heart rate to determine the causes of sleep disruption. In the picture above, Bursch and Smith are wearing cuffs that similarly record sleeping patterns and measure light exposure. 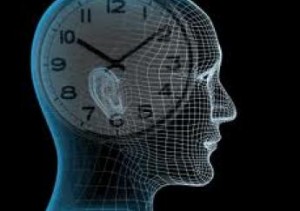 These constantly changing environmental cues confuse the human body, interfering with the astronaut's natural circadian rhythm. But adequate continuous sleep is still needed to reach satisfactory performance. Consequentially, my dad recounts covering the windows "so that it was dark inside the shuttle during our sleep period."

NASA actually produces its own cues to shift its astronauts' biological rhythms and make sleeping in space an easier task. Before liftoff, exposure to bright light at specific times ensures that vital tasks will be performed at the right biological time, when alertness has peaked. Adjustment for landing time is done by waking the crew up earlier as days pass, because when flying the shuttle, it is crucial to maintain full concentration. People's lives are on the line.

Perhaps this is why my dad has always pushed me to go to sleep at a good time. He appreciates sleep more when he comes back from space. He knows how vital sleep is to daily functions, for astronauts and also for those of us grounded on Earth.

"Don't stay up too late, Shannon."

Read an Interview With Dr. Emmanuel Mignot, discoverer of the narcolepsy gene

Read an Interview With Dr. Kim Harvey about the Stanford Summer Sleep Camp